September 2017 we provided the solar project for Verschuren Interieurbouw in Eindhoven (The Netherlands). 480 kWp, 1.400 modules in East West configuration on the roof to provide enough green elektricity for the production of furniture.

Check out the movie of the biggest self-consumption PV system in Portugal so far: IKEA Alfragide movie 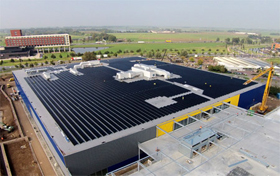 Solar power specialist Ikaros Solar installed a photovoltaic installation on the roof of the new Ikea building. This is not their first photovoltaic system on an Ikea complex, but an absolute first in the Netherlands. The production of solar energy on roofs of large companies is starting to become more popular.

On 20 November 2014, The Golden Bridge Trade & Export Awards Jury announced the winners of the 18th edition at the BLCC Club House in London. The award in the category of Best Newcomer was handed out to Ikaros Solar. The award recognizes achievements in exporting between the UK and the Benelux.